Last year, at the request of many members, the CPA revived a custom of holding annual regional meetings in the fall. In 2009 the Northeast Region met in Metuchen, and earlier this month (Nov. 4-5) we met in Baltimore.

About 40 journalists—editors, ad men, reporters, photographers, and CPA officers—attended the meeting at the Brookshire Suites downtown, a short walk from the Inner Harbor. Most of the attendees were Baltimore and Washington locals, but others were from New York, Rockville Centre, Philadelphia, Trenton, Metuchen, Pittsburgh, Toronto, and even the non-northeastern venues of Atlanta and Edmonton! 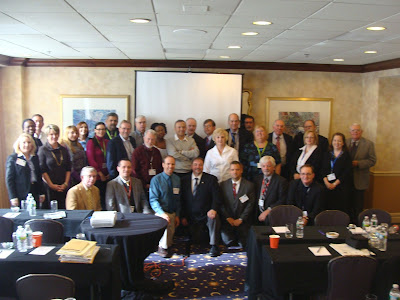 On Thursday morning, the 4th, we heard a keynote from Karen Ristau, president of the NCEA, on the challenges facing Catholic education today, before breaking into separate tracks for the editors-reporters and the advertising folks for most of the rest of the meeting. After an introduction that showed a certain continuity of concerns in Catholic education over the last 40 years (vocations shortage, financing, declining enrollment, effective religious education), Mrs. Ristau noted that 174 schools closed or merged in 2009-10, but 24 new ones opened. This is happening in a context in which our big cities also are closing public schools. She cited articles opining that Catholic schools will survive only if they stress the values that make them different, respond to the diverse backgrounds of the population (students in our schools are 30% minorities and 15% non-Catholic), and share a sense of ownership among parish, faculty, and parents. Archbishop Dolan’s recent essay in America urged the obligation of all Catholics (not just local parishioners) to support our schools. Three challenges that Catholic schools face are (1) to find way to acknowledge the good things going on in our schools, (2) to define problems accurately and find ways to address them, and (3) to preserve or restore a sense of civility. Our “top story” should be how much good Catholic schools are doing for their students.

Helen Osman, the USCCB secretary for communications (and a past president of the CPA), spoke about social media; in particular, she presented brand-new guidelines from the bishops conference (“Social Media: Best Practices and Guidelines”). Mrs. Osman said that social media are a different way of delivering a message—in our case, the Gospel—to a new generation. That generation is the one whom Benedict XVI has called “the digital continent.” In particular, she said, young Latinos are adapting to new media even faster than other young people. We in the media business should be asking ourselves: (1) Who is our target audience? (2) What media are they using? (3) Who can help us use new media to reach them?

Late in the afternoon a bus transferred us to Baltimore’s original cathedral, the Basilica of the National Shrine of the Assumption of the Blessed Virgin Mary—which is also the original cathedral church of the entire U.S. It was begun by Bishop John Carroll in 1805, designed by Benjamin Latrobe (the architect of the U.S. Capitol), completed in 1821, and completely renovated a few years ago (a few details of renovation remain to be done). It’s a magnificent piece of neo-classical architecture; Carroll chose that form over a more traditional Gothic design that Latrobe also offered, to demonstrate that American Catholics belonged to this new country and the forms of life and government it was adopting. Set on what was at the time the highest hill in Baltimore, it also rivaled in size and grandeur even the Capitol (as it was in 1805), proudly broadcasting the religious freedom of American Catholics. 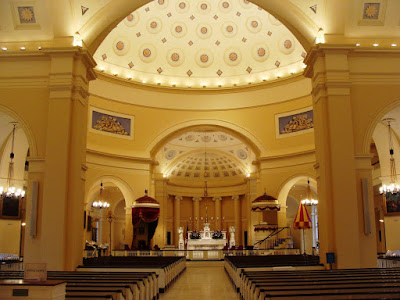 We got a good guided tour that pointed out such features as the old galleries for slaves and free blacks and for cloistered sisters, the extension of the sanctuary necessitated by Latrobe’s too-small original (a non-Catholic, he had no concept of Catholic liturgy), the paintings imported from France, the cathedra used by all the archbishops of Baltimore up to 1959 (when a new cathedral was built) and two Popes, and the tombs of Archbishop Carroll, Cardinal Gibbons, and other archbishops. We heard about great moments in Catholic history that occurred there, including the funeral of Charles Carroll of Carrollton (last surviving signer of the Declaration of Independence, and the only Catholic), the ordination of Fr. Michael McGivney, who went on to found the Knights of Columbus, visits from Mother Teresa and various civil dignitaries, and the three plenary councils of the American bishops (the third of which, in 1884, decreed that every parish should have an elementary school, set up the Catholic University of America, and commissioned the famous Baltimore Catechism).

After the tour, I concelebrated Mass for our group with the rector of the cathedral in the cozy basement chapel. 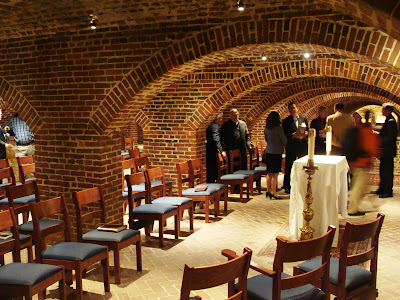 Friday’s agenda for the editorial track opened with a panel consisting of three experts from the USCCB, who discussed the policy implications of the elections earlier in the week. The panel included John Carr, executive director of the Department of Justice, Peace and Human Development; Maria Odom, executive director of the Catholic Legal Immigration Network; and Richard Doerflinger, associate director of the Secretariat for Pro-Life Activities (for more about this, see http://www.thebostonpilot.com/article.asp?ID=12605).
They were followed by a presentation on new media from Chris Gunty of the Catholic Review of Baltimore: what media are new, and how they can work for Catholic journalists.

After lunch the whole group of us got another new media presentation from communications guru David Bell, chairman emeritus of Interpublic Group and former CEO of True North Communications. He told us that our organizations can’t afford not to develop a high quality Web site as well as to establish a presence at YouTube, Facebook, Twitter, etc. The Internet has been through two waves, the first about access, the second about the platform. The third wave will be about content, including data, aesthetics, the personalization of everything, ad formats, and of course quality. He cited as models the sites of ESPN, the Wall Street Journal, Forbes, and Patch.com. And he laid out several principles: (1) Catholic media have to work together; therein lies huge strength. (2) The Internet isn’t like print; it’s an experience. (3) Edited and curated content has its proper place. (4) Relevance is key amid the slews and slews of information and data that are available. (5) The Internet loves personalities. (6) Strong content brands will survive. Finally, Mr. Bell said, publishing requires a new age journalist at the top, and passionate, savvy youngsters on the staff. “Good news,” he said, “comes to those who are willing to kiss change on the lips.”

For the editors and journalists, the conference concluded with “Photography for Reporters—Managing Two Jobs in One,” led by Ann Augherton of the Arlington Catholic Herald with ample sharing from the floor.
Posted by Fr Mike at 1:14 PM